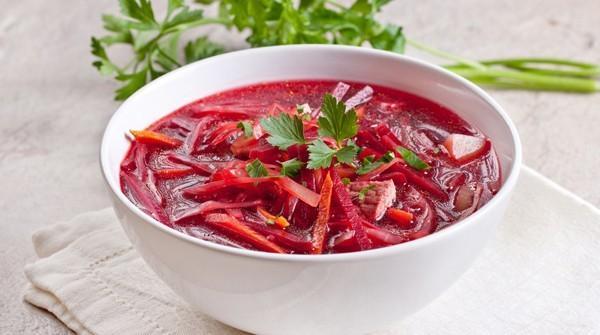 Preparation: One day prior soak the beans in 1 I of lukewarm, previously boiled water, afterwards boil it in that water. Grate the peeled and washed carrot, parsley and on a vegetable grater with larger grating slots and finely chop the leek. Put the grated vegetables into a previously boiled meat broth (2 l), boil (if the soup is to be without meat, boil the vegetables and add oil). After several minutes, when the vegetables are boiled, add the beet shavings. When the boiling vegetables start to soften, add the diced potatoes. Shred the cabbage and put it into the soup. When all the vegetables are soft, add lemon juice, tomato concentrate, sugar, salt and pepper for flavour. Put the beans into the soup along with the flavour in which they were boiled, keep the soup on the flame for a while longer. Take the soup off the flame, add finely chopped dill and cream.