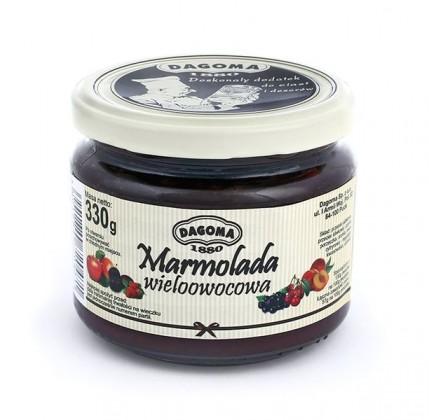 Multi-fruit marmalade is produced based on traditional recipes and the methods of boiling in cauldrons result in the fruit becoming naturally infused with sugar, which gives the product excellent flavour and aroma qualities.

In Poland the use of marmalade is common in pastry-making, while „Dagoma’s” innovative proposition is the use of marmalade also in bakery products. It is specially prepared for that purpose thanks to technological modifications. The primary changes include colour, consistency and firmness. Marmalade added to bread can have three simultaneous uses – as a sweetener, colouring agent and to extend the bread’s freshness. As a sweetener it can replace sugar, malt or corn syrup. As a colouring agent it successfully replaces caramel, malt, etc. It extends bread’s freshness just as well as syrup. Marmalade as an technological additive effortlessly spreads in dough without leaving streaks. Contrary to syrups or artificial honey, marmalades do not have to be heated or dissolved in hot water. As a result, the baked does not waste time on additional actions. Additionally, they can more precisely add water to the dough in the correct amount and temperature. Marmalade itself is dyed using aronia, a fruit highly valued for its nutritional qualities.

Adding marmalade to the dough grants bread a fruit flavour, which results in a pleasant experience which the consumer will wish to return to more than once.